With 89 million foreign tourists in 2018[1], France is one of the most famous tourist destinations in the world. 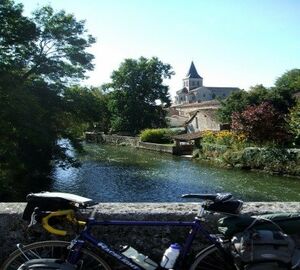 France has many cities of high cultural interest, beaches, rural regions that many enjoy for their beauty and tranquility, small and picturesque villages. A country that seduces travellers with its unfaltering familiar culture woven around café terraces, village-square markets and lace-curtained bistros with plat du jour (dish of the day) chalked on the board.

Distances are about 1 000 km north-south and east-west. France possesses a wide variety of landscapes, from coastal plains in the north and west to mountain ranges of the Alps in the south-east (the highest point is Mont Blanc 4 808 m), the Massif Central in the centre-south and the Pyrenees in the south-west. France is bounded by natural borders with the coastline (3 400 km), mountains and Rhine.

The north and north-west have a temperate climate. In the south-east, a Mediterranean climate prevails. In the west, the climate is predominantly oceanic with high rainfall, mild winters and cool to warm summers. Inland the climate becomes more continental with hot, stormy summers, colder winters and less rain.

No dominant wind from any direction for the whole country. Beware of the Mistral in Southern France.

By ferry: numerous services from England and Ireland to France. Or try Santander in Spain for a shorter ride to south-west France.

By train: The French rail company, SNCF, provides direct service from some European countries using Eurostar, Thalys, Intercity. Check current regulations for taking a bike on Eurostar, and look at the Eurotunnel website for cycling access to the terminal on the English side. You can take a bike on TER trains, the slowest. You can take a bike on Corail trains, the inter-city service, but you need a booking. Some TGVs have compartments for complete bikes, but you need a reservation. Older TGVs will take a bike only in a bag.

By bus: Eurolines are cheaper but you can't take a bike, although you can try negotiating at the counter.

By bike: France is one of those unusual countries in which almost all the borders are natural features. The only flat borders are along the Atlantic south of the Gironde (it flows through Bordeaux, in the southwest) and along the western part of the border with Belgium.

Entry requirements: No border controls between countries in the Schengen area. Note that this does not include Britain and Ireland. EU, EEA and Swiss citizens as those of many other countries do not need a visa for a stay in the whole of the Schengen area (not simply in France) of less than 90 days. People from some other countries need a visa for a stay of any length. Check before you leave.

French. Many people speak some English, especially in tourist areas, but it's especially well thought of in France to try a few French words first. However badly you speak them, they will be appreciated.

There are two map companies for road riding. One is Michelin, the tyre-maker, and the other is IGN, the national mapping agency. Scales 1 cm to 1,5 km or 1,75 km.

Avoid red roads (national roads); white roads (communal roads) are safe and pleasant; yellow (departmental roads) are bigger. Don't forget to cycle on the right! France uses standard European traffic signs. Traffic lights are on the stopping side of the junction; stop at the orange or red light. You cannot turn right on a red light unless a small cycling sign or a green arrow tells you so

If the village you seek involves a change of direction at a junction, a sign will show it. If it doesn't, ride straight on.

There is a rule across continental Europe that seems more pronounced in France than elsewhere: priority from the right. Remember that you DON'T have priority over traffic from the right unless a sign specifically tells you so. Look for a metal sign or a painted line on the side-road. if there isn't one, that road has priority.

There are some cycle paths in towns and they have the same priority as the road you are shadowing. Paths are obligatory if there is a round blue sign printed with a white cyclist

Voies vertes and véloroutes are safe and delightful cycle paths, a tranquil way to ride across the country. They show you the country, since they meander rather than take the obvious and busy route. Being for bikes, they pass through stone gates, under tunnels and across meadows where drivers can't or wouldn't go.

You will find bike shops in most towns and all cities. If you can't find a proper shop, look for branches of Décathlon or Go-Sport or large supermarkets such as Leclerc (say "Leuh-clare") and Carrefour.

Trains are fast, efficient, comfortable and inexpensive. The staff are generally friendly, trains usually run to time most and there's no better way to travel if you're not riding a bike. France has an excellent rail network that covers almost all the country. TER trains are, despite the "express" in the name, almost-all-station stoppers. You can take a bike on most TER trains but you have to use a carriage marked with a bike sign. It's often at the front or back of the train; ask on the platform. As you enter the platform area, don't forget to push your ticket into the yellow stamping machine beside the entrance.

In Paris, the metro does not take bikes. In the suburbs, especially to and from Charles de Gaulle airport at Roissy, the RER generally does take bikes outside peak times.

Youth hostels: around 160. Information and map on the FUAJ web site at www.fuaj.org. Have a look at the network of gîtes d'étape on www.gites-refuges.com

Hotels: well provided and generally as cheap for two people as for one.

Bed and breakfast: Look for chambres d'hôtes, "bed and breakfast" or the initials "B&B". Prices can work out more expensive than at a hotel of equivalent standard.

Camp sites: very popular, Camping municipal or camping à la ferme will be cheaper, friendlier and quieter. Some sites close at the end of August and almost always by the end of October, not to reopen until April at the earliest.

Wild camping: with a small tent, for a night,  people are favourable towards quiet bike riders. But it is not allowed everywhere, so ask permission if in doubt.

Small supermarkets, shops and markets (local fresh food) in towns and villages (closed noon to 2pm). In the suburbs supermarkets stay open over lunch. There are restaurants in many villages, with a plat du jour. Remember to say bonjour on entering a small shop or bar; it is impolite not to.

Drinkable unless a sign says otherwise (eau non potable). There is a tap in most cemeteries and you can drink the water.

Mobile phone coverage is good across the country.

Electricity is 220 to 230v 50Hz. You will need an adaptor for US and UK plugs and a voltage converter for American equipment.

Meeting the locals: Strangers are not always greeted with a smile but don't worry, it's not coldness but politeness. Try to speak a few French words for the first contact. They will help you if you struggle or even if you have to speak English.

One of the safest countries in the world. However, watch for pickpocketing and purse-snatching in tourist hot-spots.

Along rivers and Atlantic Ocean : a nice and safe 690km trip, about two weeks' cycling. An easy ride starting at Saumur along the Thouet river, the deep forest of Mervent, the quiet and green Marais Poitevin, the sunny coast of the Vendée and the west part of the Loire valley. You'll discover medieval cities and castles, Roman churches and old bridges, abbeys, wine caves, beaches and beautiful landscapes.

Part 1: about 146 km starting from Saumur where the Thouet river joins the Loire valley and finishing at the river's source in Le Beugnon. You will be cycling on two kinds of road: small lanes and farm tracks. Le Thouet à vélo

Part 2: about 172 km starting by 25 km to Vouvant (little roads without signs). Up-and-down path through the forest and gentle flat paths in the marsh to l'Aiguillon-sur-Mer. http://vendeevelo.vendee.fr/Les-differentes-pistes/Marais-Poitevin/

Part 3: about 220 km along the Ocean, an easy, well signed trip. Many sandy beaches and camping sites. Not to be missed : Noirmoutier Island. La Vélodyssée

Part 4  about 152 km from Paimboeuf to Saumur along the Loire valley. La Loire à vélo

If you'd like more ideas and information, you can visit the site of Cyclo-Camping International. You're welcome to join. Many members speak English.

To find articles that have appeared in the CCI magazine, go here and search France revue.